I’m not sure if I’ll resurrect Badge of the Day or not; it’s not so much getting the time to do it as wondering if a literally random badge isn’t too weird in some cases, even though I guess it can lead into unexpected areas. I’m a big fan of “randomness” and guess I have a fatalistic view of things (in other words, nothing’s “random”), but trying to find meaning on even a daily basis in some obscure element of my childhood is pushing it a bit. I think I might instead choose something I find interesting from all this “dusty old memorabilia” (as Donald Fagen has it on his latest wonderful album, Sunken Condos) as I think it’ll be more interesting. Marginally 😉

So, here’s the latest from my recent unearthings of Stuff From My Past™ – an early work of Thoughtcat fiction from a school exercise book, dated “11th of November” 1977 (I would’ve been six and a half). 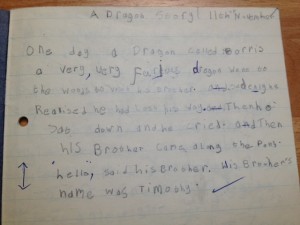 One day a Dragon called Borris a very, very furious dragon went to the woods to visit his brother. and sudenly he Realised he had Lost his way and Then he sat down and he cried. and Then his Brother came along the Path. hello said his Brother. his Brother’s name was Timothy.

Wish I was still that good.