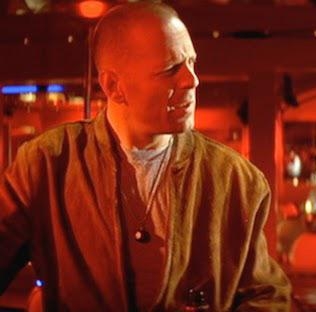 I got into a slight Tarantino binge this week. Lots of little Pulp Fiction clips had been coming up on YouTube so even though I’d seen it about 10 times already I gave in and watched the whole thing on Prime Video. The platform said the film was “free with ads”. I thought: ads? This was new to me. Don’t I pay for Prime already? So why ads? I was doubtful, but I watched the movie. It’s as great as it ever was and still one of my top five favourite films of all time. It’s nostalgic, as it came out when I was in my mid-20s, but also hasn’t aged a bit (except, maybe, for the phones. Ah, phones which were just phones).

However. Twice, right in the middle of a scene, practically in the middle of some dialogue for chrissake, I suddenly got an “ad”. The first ad was for, er, Pulp Fiction on Prime Video. A weird little montage of famous clips from the film. (And they are practically all famous, which makes this even more redundant.) Having an ad for a famously postmodern film in the middle of watching the film itself was I suppose suitably meta, but hey, guys, I’m a captive audience, y’know? I can’t remember what the second ad was for, laundry detergent probably.

Next night I watched Kill Bill Vol 1 on Netflix. No ads, but also: no subtitles. It’d been so long since I’d seen the film (I first saw it in the West End at the time it was released) that when it came to all the Japanese sections I just assumed having no subtitles was deliberate, that you were supposed to just work out what was going on from the tone and the action. Bold, but fair. Revolutionary, in fact. But maybe I was giving Tarantino undue credit. It was only right at the end and the famous line “That really was a Hattori Hanzo sword” which I remembered reading on screen, because otherwise I would have had no idea of what was being said, that I remembered the original did show the captions and I realised I could just have turned on normal subtitles. My mistake, but still. Ridiculous. Why should I have had to?

Then last night I went back to Netflix and searched for Kill Bill Vol 2. They didn’t have it. That’s correct. Netflix have Kill Bill Vol 1 but not Kill Bill Vol 2. The literal second part of the film. The other half. The concluding episode. This goes a bit beyond a platform not having an inferior sequel (or, in Netflix’s case more often, having all the crappy sequels but not the original). Momentarily this was enough for me to hate the world. Luckily though it was on Prime Video… albeit, yes! With ads. The ads on this movie were much worse than on Pulp Fiction, cropping up about every 20 minutes practically mid-punch. You’re watching some stylish ultra-violence and it jump-cuts to a jolly commercial. I’m proud to say I can’t remember a single advertiser or product now I sit and write this the next morning, but in the moment this was no consolation. Tarantino himself would probably approve, to be fair, as the film is after all partly a pastiche of cheesy 70s TV kung fu shows. But at least those shows were made with ad breaks in mind – films aren’t, or where films have traditionally been shown with ads on network TV (remember that??) at least someone has actually sat down and bothered to work out appropriate points in the action for a commercial break. This doesn’t even need to make dramatic sense when done properly: I remember back in the late 80s Channel 4 once showed Paris, Texas late at night and they almost used the ad breaks as poetically as Wim Wenders did his camera. There’s a beautiful point in the action where the camera roves around over a cityscape at sunset and settles on the US flag, and Channel 4 chose the ad break right then, leaving you to focus on this moment, the way the flag reminds you of the film’s title, of the film you’re watching and where it’s set and its quietness and the vast landscapes it inhabits. Prime’s take on ads by contrast is about as poetic as a kung fu thump to your face. It’s just an algorithm, and it sucks.

YouTube, which prompted me to revisit the films in the first place, is just as bad – the same ads for the same two or three “food straight to your door in 10 seconds”-type services every time you watch anything, or, when you watch something longer than about 8 minutes, again, bang, an ad for a personal injury litigation firm. To add insult to (personal) injury, platforms treat consumers like children, forcing creators to pixellate female nipples on pain of account suspension, and suppressing our content which they use as a vehicle for their profiteering if we fail to latch on to their boring new features they’ve only created to give themselves more commercial potential.

How did we get to a point where we’ve allowed our audio-visual entertainment to be run by computers programmed by people who care only about money and not about cinema or any sort of user experience? It’s little more than legitimised spam. It’s bad enough having crappy political leadership in our lives, but this takes the biscuit. At least there’s some notion of “democracy” in government. It feels decreasingly true, but you can still just about vote those people out. By comparison you can’t decide how Netflix or Prime Video or YouTube or Instagram are run. You could stop using them, but you know you won’t, because they’re too massive. Nobody will see your great photo anywhere else. Blockbuster doesn’t exist anymore and you want to make a viewing decision from your sofa, so you don’t want to wait for the DVD to be delivered (by, er, Amazon).

This experience happened during a week in which Facebook, WhatsApp and Instagram all went offline for hours because a) they’re all owned by the same people and b) someone thought it would be a good idea for them all to be linked by the same technology.

All of these are services that all of us use, not because we want to be sold something but because we have something to offer the world or share with people – social networking, remember? – and we have failed ourselves.