‘If these thoughts interest you for even a moment, you are lost’ – L.C. 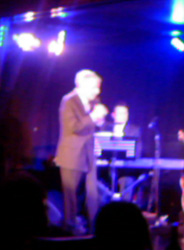 I realised the best part of a 20-year dream the other day: I saw Leonard Cohen up close and personal. And I arrived at one distinct conclusion: he’s very small. Almost as small as me, in fact. This is how it happened…

A few weeks ago I got an email from Marie Mazur, who runs several Cohen-related websites, including one of the original and best, Speaking Cohen. Thanks to the internet, Marie is one of those people who I can say is a true friend despite never having met her: she keeps me (and thousands of other die-hard fans) up to date with LC’s movements and projects and in turn I’ve contributed a piece or two to her site. She also did a fantastic thing for me last year in obtaining a signed copy of LC’s recent Book of Longing fresh from the man himself at a Toronto promotional event. One day I hope to return the favour… Read the full blog post

14th March 2009: As lots of people have been doing something faintly embarrassing in the past 24 hours in aid of Red Nose Day, here is my contribution, a version of Leonard Cohen’s Hallelujah I did on my new Makala ukulele, inspired by George Formby. Read the original blog post

This is me providing guitar accompaniment for Antonio Savi on Chelsea Hotel No 2 at one of the 2002 Hydra convention open mic sessions. Antonio was a wonderful singer and the performance was unrehearsed. The guitar coda was based on one LC played in a live version of the song in the 1988 Songs from a Life documentary. It’s more interesting musically than as a video but it’s a moment I’m extremely proud of. Watch this clip at YouTube 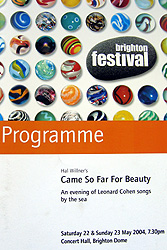 This second outing for Hal Willner’s all-star tribute show featured Nick Cave, Rufus and Martha Wainwright, Jarvis Cocker and many more, and some of the performances were later featured in the excellent 2006 film/soundtrack Leonard Cohen – I’m Your Man. I originally posted the full text to the Leonard Cohen Forum and then offered it to the Leonard Cohen Files, who linked to the original Thoughtcat page. Cohen band singer Julie Christensen later got in touch asking “whether I’d mind” if she sent the report around her mailing list, and posted a link to the review on her blog calling it “a good report by a likeable blogger named Richard”. Perla Batalla’s management also emailed me to put me right on a couple of points after it was published.

A slightly breathless account written for The Leonard Cohen Files, where it’s hosted.

An account of attending this Royal Albert Hall show from The Future tour, written to ‘bulk out’ a transcript of a TV interview on Later with Jools Holland from the same time, which I did for Speaking Cohen circa 2000. See an extract from the interview on YouTube.

I first saw this interview at the 2002 Hydra convention and it was so good I just had to burn the midnight oil getting down every word for Speaking Cohen. I didn’t initially own up to being the transcriber as I was afraid of being sued for copyright infringement by Ms Lundberg or her TV company, but as no writs have been forthcoming, what the hell…

‘Oh, I see you’ve gone and changed your name again…’ Surely a strong contender for the most unlikely internet application ever. Conceived by Thoughtcat’s friend Elizabeth, Javascript written by a guy called Adam Gundry and later modified with the assistance of Bing O’Tree… I had very little to do with it, in fact.

A letter to the Guardian

Thoughtcat puts Arthur Smith right in 2000. For the record, I did go and see Arthur’s one-man Cohen show, and it was excellent – I’m just a pedant. The articles I refer to in my letter are Has anyone here seen Leonard? (actually now returns a ‘sorry, we can’t find that’ result, possibly because Smith only sanctioned its web use for a limited period after the print publication) and Duck gets the bird from West End show.

2 thoughts on “Leonard Cohen and me”