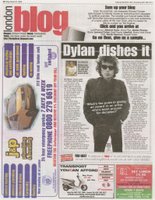 One thought on “Fame at last – Thoughtcat in the London Informer”