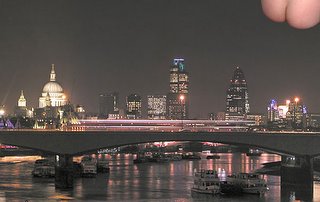 The BBC reported last week that the UK had just seen its biggest moon for nearly 20 years after its orbit brought it closer to earth than normal. Jim O’Donnell of the Royal Greenwich Observatory said it was also “higher in the sky than usual… the combination of those two very rare circumstances gives us a rather spectacular full Moon.” I should cocoa… (bloody difficult taking this photo, I should add).