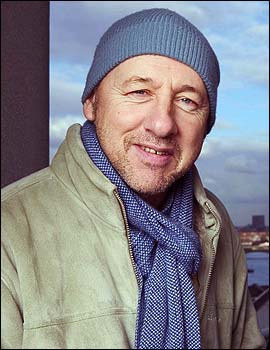 Amazon today sent me an email saying “Customers who have purchased or rated Daylight Crossing by The Webb Sisters might like to know that Privateering by Mark Knopfler will be released on 3 September 2012. You can pre-order yours for just £11.99.” I didn’t really see the connection as the Webb Sisters have proper singy voices and don’t play virtuoso guitar, and (as much as I loved their contribution to Leonard Cohen’s tour band) Daylight Crossing sounded a bit like a rejected Bangles album, which in fairness isn’t the case with even Knopfler’s records. But nonetheless, I read on. The album cover depicted an old van in the woods somewhere surrounded by some old tyres and a sad-looking Collie. This wasn’t terribly inspiring. More so however were the track titles which were then listed. As I read them I was building up a picture in my mind – an audio picture, if you will – of what the album sounded like and what the songs were about. I still haven’t listened to the record but this is what I understand, from the track titles alone, the album to be like.

1. Redbud Tree. Mark secures his return to the songwriting scene with this acoustic, sleepy number about the simple things in life. Lyric: “I wish I was Nick Drake / Or Sir Francis Drake / Or that other guy, the American one / Then I could spend all day / Drifting on a lake / Somewhere in America / Picking my dobro.” Guitar used: dobro (unexpectedly).

2. Haul Away. Nautical-flavoured rock anthem about Mark’s new-found love of boating. Soaring vocal “Haul away, haul away / Off the coast / Of America.” With a great electric guitar solo (played on his famous custom Pensa Mk2) ladelled like custard over the American apple pie of sweet lyricism, this marks Mark’s firm return to form.

4. Privateering. Downbeat, smoky number sees Mark get out his red Strat for the first time since Sultans of Swing. “I had a private earring / I wore it all the time / But in America they took it the wrong way / So I took it out again.” The Strat incidentally has since had a new neck, new frets, new pickups, new tremelo, new electrics, new body and a new headstock installed at a cost of £25,000 as well as a new set of Ernie Ball strings (£5.95).

5. Miss You Blues. Plucked on a custom Gibson steel-string, this beautiful track sees Mark at his most mournfully reflective. “I’m on a big tour / Of small arenas / In America / Darling I miss you / Although actually it’s quite nice here.”

6. Corned Beef City. A memoir of growing up in the slums of Glasgow, which Mark experienced first-hand in middle-class Newcastle. A rocking “number” in the style of Jerry Lee Lewis bashed out on a Fender Jazz bass specially customised to have six normal guitar strings. “I sang in Corned Beef City / They didn’t pay in kind / Which was just as well / As I am a vegetarian these days / It’s the American influence / You see.”

7. Go, Love. Mark’s first outing on a mandolin, a custom McLanahan “Markdolin 94 B” with humbucker pickups. “Go, love / If you don’t love me / I will understand / I’d rather you just went / As there’s plenty more fish / In the sea / In America.” Tender.

8. Hot or What. An absolute spanker of an upbeat rock melody, with a full band consisting of Knopfler on five different guitars and Guy Fletcher on all other instruments. “Is it hot or what? / Here in Texas / In America / I don’t always agree with the politics / But Texas is where it’s at / ‘At’ can rhyme with ‘what’ can’t it?”

9. Yon Two Crows. Possibly the saddest of all Knopfler songs ever written on disc 1. A short-but-saccharine acoustic ballad performed on Mark’s custom “Spanish Bastard” nylon-string guitar. “I’m just an old folk singer / Who can’t really sing / My baby done left me / And my voice is all trembly / But at least I’ve got these two yon crows / In my 500-acre back yard / In America / To sing to / Oh bugger, they’ve gone.”

10. Seattle. Mark gets out his fuzz box and cranks up his custom Fender Mustang in an embarrassing take on the popular new American musical style, grunge. “I came to Seattle / To find my way / Now God only knows / What I want to say / Because I cut up all my lyrics / To make them sound more interesting / And this is the result / Er, they still sound pretty boring / Oh dear.”

1. Kingdom of Gold. “I came to America / From Ireland / To search for this Kingdom of Gold,” sings Knopfler in this soaring opener, featuring The Chieftains, Michael Flatley and the Nolan Sisters. Mark himself plays a custom green-painted Gibson Shamrockster. “I am Irish really you know / Even though I was born in Glasgow / Or was it Newcastle / To be honest I can’t remember / Anyway America was disappointing / I didn’t find gold / But I did make a lot of money.”

2. Got To Have Something. A chunky little riff chopped out on Mark’s custom Fender Bloke. “You’ve got to have something / You can do / Whether’s it’s rolling in clover / Or visiting the zoo / I found something / It wasn’t much / I’m just a little folksinger / Anglo-American folkpicker / But I ain’t lost my touch.”

3. Radio City Serenade. A welcome return to the Making Movies-era in this 8-minute fully-rocking dobro anthem to Liverpool’s famous tower. “You thought this song / Was going to be about New York’s music hall / But ha! I got you there / Just because I always write about America / And pretend to be American / That is when I’m not pretending to be Irish / Doesn’t mean I can’t also still write about / My home, the United States of Kingdom.” Features ex-Queen bass player John Deacon, in a wry pun on St. John’s Beacon.

4. I Used To Could. Mark’s first foray into speed ukulele, Knopfler reportedly drank two espressos before recording this song “just to get the feeling right”. “Those were the days / When I could spell / And knew my grammar / I was an English teacher once you know / That’s how I got the idea / For Romeo and Juliet / I used to could do all them things / And talk proper / uh-huh, uh-huh.” Basic track laid down in Mark’s home studio, twelve guitar solos overdubbed via the Internet and mixed in American Studios, America.

5. Gator Blood. A disc of firsts, this choppy little Gibson Chopper riff sees chunky Knopfler being influenced by the deep south of America. “I was in the bayou / I got in the swamp / And shot a political allegory / My hands wrist-deep in blood / That’s gator blood / Also known as gatorade / Those big corporates are bastards, you know.”

6. Bluebird. Another bird song (geddit??), this is in fact a 4-verse blues take on Sebastian Faulks’s epic WWII novel Birdsong, reflecting Mark’s fascination with history. “I went to France / in 1871 / I did some rude things / Then it all fell apart / So I went to America / And did some other things / History is just one darn thing after the other.” Soaring blues solo on Mark’s Ibanez Pecorino 9-string custom played for the first time since 2002’s Songs of the American Songwriters 4-disc set.

7. Dream of the Drowned Submariner. Astonishing 19-minute, multi-section epic musical odyssey featuring Rick Wakeman on Stylophone. Contains a 6-minute guitar solo played on Mark’s original 1966 Fender Doughnut. Unfortunately the other 13 minutes contain lyrics such as “I dived deep down / Into the ocean blue / But I forgot my nose-clip / So now I have a sinus infection / This sort of thing wouldn’t happen / In America.”

8. Blood and Water. As disc 2 starts to end, a water theme to the album emerges – in fact a water and blood theme. Performed on Mark’s custom Gibson Atlantis, built specially for this song with a clear glass neck encasing a ship in water which glides up and down as you tilt it like in one of those biros you used to be able to buy at Cornish resorts. The Knopf turns the lights down low and laments: “I sang this song / Which was a political allegory / But all those idiots / Thought I was singing about alligators / That’s the last time I sing anything meaningful / In America / Oh hang on, that can’t be right.”

9. Today is Okay. Knopfler’s custom Gretsch Bert Jansch (originally owned by Roger Whittaker) lifts the mood for this jaunty, choppy little cheeseburger of a song. “Today is okay / It could be worse / I could have no money / And no talent at all / Instead I’ve got oodles of both / So today is okay / Today is quite good.”

10. After the Bean Stalk. After Neil Young’s After the Goldrush, The Eagles’s After the Thrill is Gone and Freddie Starr’s After the Laughter, Mark Knopfler pays tribute to the “after” genre with After the Bean Stalk. “I threw out the beans / This stalk grew up / So I climbed up / And up and up / And reached the top / There wasn’t much there / So I moved to America.” Performed on, oh I don’t know, some sort of guitar I presume. I’m past caring to be honest.

Disclaimer: I love the early Dire Straits albums and spent many years trying to play guitar like Mark Knopfler. Privateering is available from Amazon.