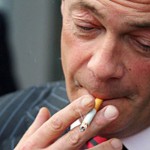 “This legislation will make life very hard for our policy team, who work on the backs of fag packets all the time,” said Farage.

“These aren’t plain packs at all, they will be plastered with pictures of blackened lungs, tumours and God knows what else. It’s an unacceptable intrusion into the manufacture and promotion of political propaganda.”

Nigel Farage has a postgraduate degree in smoking, and claims to have studied Advanced Tobacco Consumption at the University of Middle England, Britainshire.

Public Health Minister Jane Ellison told MPs that the government’s move to prohibit branded cigarette packaging was likely to have a positive impact on public health, particularly for children.

“My children are proud passive smokers,” railed Farage. “Giving yourself and others around you lung cancer is a fundamental British right.

“Since Sir Walter Raleigh introduced the weed to Britain we have had a great tradition in this country of many disgusting chest conditions and making the environment horrible for other people.

“I’ve nothing against our non-smoking neighbours, they’re very welcome to come to Britain just as long as they leave after 24 hours, don’t take benefits and don’t use our beloved NHS, which I want to privatise as soon as possible.”