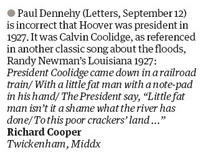 I suppose I hardly need add to the column inches (or digital equivalent) laying into the US government’s pathetic response to the Katrina tragedy, but it surely can’t be said often enough that the way the refugees of Louisiana have been treated beggars belief. Yesterday George Bush denied the response was slow or that being black (the affected people, that is, not Bush of course) had anything to do with it. Like Tony Blair denying that the bombings in London on what we must now call 7/7 had anything to do with the war in Iraq, it makes you wonder how it is that the only people who believe the bullshit are the very people we trust to tell us the truth.

Anyway, I’ve been following the series of letters in the Guardian in recent days about the old blues songs about the Louisiana floods of 1927, which documented the same effects of the same sort of disaster on the same poor, black people of the same area. Correspondents have also highlighted Bob Dylan’s “uncanny prescience” in his 2001 song High Water. Although this song was inspired by the work and experiences of Charley Patton, one of the original bluesmen in question, the fact that Dylan had now been brought into the discussion prompted me to look up an old Aaron Neville album called Warm Your Heart (which I was just about to get rid of, oddly enough) which features a cover of Randy Newman’s Louisiana 1927. In honesty I didn’t know who was US president at the time of the original floods until I read the lyrics and found there the reference to Coolidge. Doubting that an ultra-literate songwriter like Randy Newman would have got such a fact wrong, I nonetheless double-checked the reference in Wikipedia before sending the letter above. As my initial link to the Guardian letters of 12th September attests, the reference by the original correspondent to Hoover has now become a matter for the Guardian’s Corrections & Clarifications department. (I also didn’t know what “crackers land” meant, and therefore felt a bit uneasy quoting it, but it was taken from the official Randy Newman site, so should have been correct, and in fact the Guardian, when printing my letter, added an apostrophe – i.e. “crackers’ land” – indicating that “crackers” were the residents of the area in question.) Altogether therefore I feel a bit embarrassed about all this, but this whole story seems to prove that, with the internet as powerful as it is, we’re all experts now.

All of which brings me to the image of my letter at the top of this post. As part of its recent relaunch in “Berliner” format, The Guardian is offering its excellent digital edition of the paper free until 26th September. It’s really just a very trendy version of the website, as all Guardian stories can be read for free on the main site anyway (the standard text version of my letter is on this page for instance), but the digital edition allows you to click on a story and read a PDF or JPG version of the actual paper as printed, from which the above is a clipping. Like a great many things these days I think a digital Guardian is a bit of a luxury (if you’re going to ordinarily pay through the nose for such a service you might as well read the paper and be done with it) but it’s nice nonetheless.

The Berliner Guardian incidentally is very cool but the smaller size feels weird, as if something’s missing. When I went to buy the launch edition at the paper stands in WH Smith I couldn’t find it to begin with – I thought it must have sold out already, until finally it turned up looking a bit sorry for itself in a compartment designed for a normal-sized broadsheet. And it’s still too big not to fold in half when you’re carrying it or laying it down somewhere, but because of the dimensions it feels wrong being folded either horizontally or vertically… but I feel I’ve strayed from the point somewhat. To round off therefore and return to my original topic, here’s a link to a withering attack on the US Federal Emergency Management Agency’s handling of the Katrina disaster, with a mention in it of Russell Hoban‘s Riddley Walker no less. As one of my Hoban friends commented when she saw this, “‘Riddley Walker’ and FEMA on common ground — this is eerie.” Or maybe just scary.

2 thoughts on “Getting the blues”