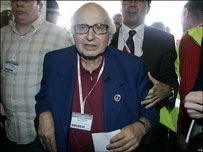 I am very proud to say that Walter Wolfgang, the 82-year-old anti-war activist who was manhandled out of the Labour Party conference this week for shouting the word “nonsense” during a Jack Straw speech about Iraq, lives in my neighbourhood. I sometimes see him shopping in my local Waitrose (a home from home, but that’s another story). He actually used to be a much closer neighbour of mine when I lived in a different part of the town years ago but at that time I didn’t know anything about him. Now the whole world knows about Mr Wolfgang (or “Walter” as Tony Blair called him rather patronisingly in his “apology” for the delegate’s treatment).

The first time I got to know about WW was during the war in Kosovo when I attended a local political meeting. (That invasion seemed pretty dire at the time, although compared to Iraq it now seems a model of legitimacy.) It was a slightly weird occasion – in fact so much so that this was not only the first but the last political meeting I’ve ever been to – where the war wasn’t really discussed but railed against by a bunch of lefty oddballs whose views ranged from moderately critical to downright bonkers. As chair of the “debate”, WW was one of the few calm voices in the room. I have to admit that when I first saw the footage of WW being bundled out of the conference on Wednesday’s Channel 4 News, my gut reaction was that the poor old sod had finally lost it, but I was delighted to see that this was a million miles from the truth.

Yesterday’s Independent lost no time in citing Mr Wolfgang’s treatment as the perfect example of everything that is sick at the heart of the government. As if that front page splash with a photo of WW being led away by police wasn’t enough, today’s front page features a whole article by the man himself about the incident and why he was protesting. It’s excellent: “My case is not important” is the self-effacing opening sentence, while later he describes Blair as “the worst leader the Labour Party has ever had” and observes: “Blair’s instincts are basically those of a Tory. He picked up this cause from the Americans without even analysing it. I suspect that he is too theatrical even to realise that he is lying.” That’s a great line and I think the best and most succinct explanation I’ve yet heard for why Blair has acted (pun intended) the way he has.

So, good on you, Mr Wolfgang. If I ran a restaurant I’d invite you in for a meal on the house but as it is I’ll probably have to make do with shaking your hand the next time I see you in Waitrose.